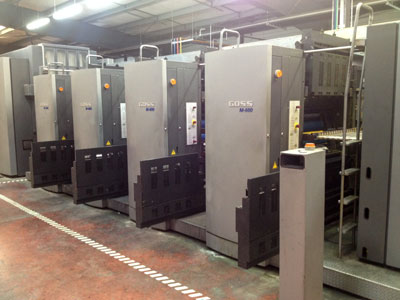 Earlier this year Guardian Print of New Zealand opted to purchase a beautiful pre-used Goss M600 press through GWS Printing Systems. The ambitious Ashburton-based company is the only print house in New Zealand to boast an ISO9001-registration, which they have now held for six years in a row.

According to General Manager Steve Gallop the company was looking for a new press to expand their current operations. ‘We had a very clear picture of what we needed. When we travelled to Europe GWS was able to show us a number of interesting machines. But after inspecting this M600 we immediately decided this machine was an ideal match.’

After concluding the deal a crew of engineers travelled from New Zealand to France to dismantle the machine. After a few weeks of dismantling and a long journey over the world’s seas the containers arrived in New Zealand.

The press is being installed in a brand new location,close to Christchurch.